Editor’s note: This is the second and final part of our local growth control series. 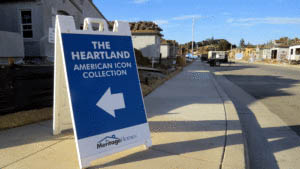 Photo by Marty Cheek
Meritage Homes’ Heartland Estates housing development is now being built near the corner of Hecker Pass and Santa Teresa Boulevard in Gilroy. Houses range from $871,450 to $943,450.

South Valley voters will decide two methods of maintaining the quality of life in their communities. Each vote cast for or against Measure S and Measure H will be important in shaping the future of the Morgan Hill, Gilroy and San Martin for generations to come.

Gilroy citizens will vote Nov. 8 on Measure H, an Urban Growth Boundary initiative that sets a perimeter around the city limiting how far it can expand into land now primarily agricultural.

Morgan Hill citizens will vote on Measure S, which puts a population cap of 58,200 for the year 2035 on the community’s growth.

Photo by Marty Cheek
Meritage Homes’ Heartland Estates housing development is now being built near the corner of Hecker Pass and Santa Teresa Boulevard in Gilroy.

With that burgeoning population will come an accompanying demand for new homes and new jobs in industrial centers. That means agricultural land and open space could be paved throughout the county — a main reason why many developers are now eyeing the South Valley with its extensive non-urban acreage. Although the North Valley cities are experiencing a larger increase in their population numbers, the less congested South Valley is now seeing a larger percentage increase in their populations. The housing crisis trend will no doubt continue — which is why the voters’ decisions on Measure S and Measure H will shape the South Valley mixed rural-urban landscape forever.

In Garlic City, a group of citizens calling themselves Gilroy Growing Smarter worked to put Measure H on the ballot. If passed, it would create an UGB around the city to guide development in a compact shape with a purpose of preserving the surrounding open space and farm land until the year 2040. 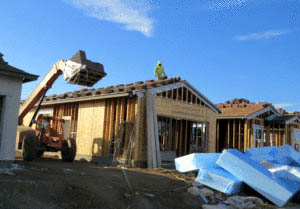 Photo by Marty Cheek
Meritage Homes’ Heartland Estates housing development is now being built near the corner of Hecker Pass and Santa Teresa Boulevard in Gilroy.

“A ‘yes’ on Measure H will make the voice of the people heard in every development decision in Gilroy,” said Dave Lima, the treasurer of Gilroy Growing Smarter.

Gilroy enjoys abundant surrounding open land, which is relatively easy to convert to massively profitable housing developments, Lima said. The Bay Area economy is strong enough to attract affluent home buyers and drive housing prices up, no matter how congested the commutes get or how many homes are built.

“Housing developments offer huge impact fees for constructing infrastructure that are irresistible to politicians, even though the ongoing cost of that infrastructure is a killing drain on the city’s finances,” he said. “Measure H will encourage infill and compact development projects which will continue to generate impact fees. That same compact pattern of development will optimize city services because of the nearness of development to the core services and the sharing of infrastructure and services with nearby existing neighbors.”

This efficiency in services will be more sustainable financially than if the city allows sprawling subdivisions to be built, he said. In addition, by investing in downtown development and job creation instead of excessive housing, positive cash flow will come from taxes which will create a significant and welcome budget surplus, he said.

easure H offers Gilroy’s city leaders a chance to focus on job creation and with it the prospect of increased revenue and efficient city services, he said.

Tammy Brownlow, president and CEO of the Gilroy Economic Development Corporation, which along with the Gilroy Chamber of Commerce opposes Measure H, disagrees with Gilroy Growing Smarter’s view of the initiative’s promised benefits for the city’s future. This opinion is based on analysis of the potential effects as authorized under California’s Elections Code Section “9212 Report” completed in July by an independent consulting firm. It includes several negative consequences for the city, she said.

“Specific to economic development, the numbers are very telling — a loss of 45 percent in potential new jobs,” she said. “In fact, the report further states that jobs would be reduced by a more significant degree than population.”

One reason Gilroy and Morgan Hill have seen so much growth in the past few years is because homes have been in the pipeline or are part of a backlog of projects catching up after the 2008 recession. This spike in construction creates an illusion of sprawl coming into the region, Brownlow said.

“Much of the residential development newly completed or under construction now are projects that have been in the process for 15 years or more,” she said. “Many of these projects were approved prior to the recession, during which there were few new construction starts. As the economy improved there was pent-up demand for homes in Gilroy and the entire region. The level of construction we see today is the result of a bottleneck and not what we would typically see under normal economic conditions coupled with thoughtful long-term planning.”

Another reason the GEDC opposes Measure H is because the Urban Growth Boundary is “redundant” and not necessary for controlling the amount of land and location of growth, she said.

“The Santa Clara County Local Agency Formation Commission has the final say about how and when growth will happen outside the Urban Service Area,” Brownlow said. “Gilroy also has a self-imposed building permit limitation in the Residential Development Ordinance (RDO). Under the RDO the city limits the number of building permits that can be issued over a 10-year period. In fact, Gilroy’s RDO is the second strongest in the county.”

With Measure S, the city of Morgan Hill hopes to sustain its quality of life through a Residential Development Control System while avoiding sprawl. In 1977, voters passed Measure E to set up the RDCS with a population target of 30,000 by the year 2000. Measure E also established a system to allocate housing units. Over the years, voters have passed updates to the RDCS, with Measure S being the latest.

“Although Measure S is specific to managing residential growth in Morgan Hill, it is an important component of regional efforts to ensure that growth in the South County is responsibly planned by taking into consideration any impacts on the environment, schools, local economy, transportation, public infrastructure, and affordable housing,” said City Manager Steve Rymer.

The purpose of Measure S is to encourage an orderly, efficient, and sustainable residential development growth pattern; promote a diverse stock of high quality housing; ensure that new development does not adversely impact the level of public services and infrastructure; and establish a limit on the amount and rate of residential growth through 2035, he said.

“The city is proud of the fact that Morgan Hill voters have approved previous versions of the RDCS that have resulted in many community benefits,” he said. “Measure S builds on this success by awarding allotments to competing housing development projects.”

The measure has been well debated on the November campaign trail. Incumbent Mayor Steve Tate, mayoral candidate Joseph Carrillo, incumbent city council members Larry Carr and Marilyn Librers and candidate Mario Banuelos support passage of Measure S because they advocate continued growth control for the city. Mayoral candidate Kirk Bertolet and city council candidates Armando Benavides and Rene Spring oppose the measure because they are running a campaign of “slow growth” for the city and believe Measure S will not halt “urban sprawl.”

“We are not a ‘no growth’ group of people. We say instead that when growth and development happen, that development should happen the right way,” he said. “The development that comes to Gilroy and Morgan Hill should happen in a way that preserves the character of the communities that people chose as their home, with small-town charm, surrounded by farmland, and centered on a vibrant downtown.”

The South Valley in coming decades faces a future where rural land will transform into housing developments and industrial parks as Silicon Valley requires real estate to build new homes for workers and buildings for expanding corporations. The issue of controlling that growth is a heated one, with Morgan Hill and Gilroy voters deciding Nov. 8 two very different approaches to the challenge of how to maintain a high quality of life with tens of thousands of people moving here.