Six years after breaking his back, J.C. Elrod successfully returns to the track 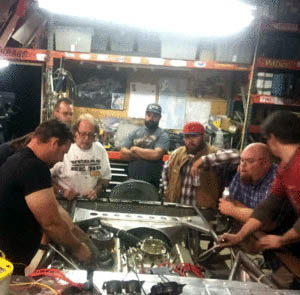 J.C Elrod and the gang working out the final kinks in the car before its first race. This would be a typical Wednesday night scene at the shop in San Martin.
Photo courtesy Connor Quinn

There are a couple of things that just scream America: apple pie, the First and Second amendments and auto racing. The later started in the Prohibition era when bootleggers needed cars faster than the police to get moonshine to customers. They started racing against each other to see who was the fastest. Just as a bunch of outlaws made a country, a bunch of outlaws made a sport.

Now in a workshop in San Martin, the Elrod Racing team carries on that outlaw spirit — although in a manner a bit more respectful to the law.

On any given Wednesday night if you’re lucky enough to get an invite, you can come spend time barbecuing and bantering with this crowd.

The shop is a proud homage to the off-road racing lifestyle. Trophies going back four decades line the walls. Everything needed to build a machine capable of enduring the roughest terrain can be found. Add a cooler with a never ending supply of Coors Light and you’re in one of my favorite spots.

I’ve known the family after I was introduced to them two decades ago through Curtis Giacolone, a childhood friend. His cousin, J.C. Elrod, is the heir apparent to the racing legacy that his father Jeff and his uncle Wes created.

For J.C., the last weekend of September would be his first time in a race car after he broke his back in a motorcycle accident six years ago that left him incapable of pursuing his passion. His cousin Curtis stepped into the driver’s seat while J.C. recovered.

I grew up riding dirt bikes and even tried my hand at racing, but was incredibly unsuccessful and didn’t pursue it. With those memories in mind and the nostalgic feeling of being around the smell of exhaust and burnt rubber I was excited to go back to a racetrack.

Even more so since this would mark my friend’s return to racing. I was there on a Wednesday night when J.C. announced and proudly displayed the 1977 Camaro he would be converting to race American stock out at Watsonville. While a great deal of input into how the car should be built came from Jeff and Wes, the mastermind behind the build would come from another friend, Donnie Powers, who in my opinion has a clairvoyant mind when it comes to anything mechanical.

The build started about five months before the first race and I got to witness some of the transformation from rust bucket to race car. Studying at Gavilan would keep me from coming to those great Wednesday shop nights, so I missed seeing the final stages of getting the car ready for the track. However, I was ready to put aside a weekend to watch the finished product in action. I wouldn’t be the only one either, as more than a dozen locals would come out as well.

When it came down to the 11th hour and they still didn’t have an engine, it was Wes who came through. He built a race engine out of an old Chevy small block they got out of a truck.

The final product came out looking more road warrior than race car, as they had no time to paint it. In fact, the only parts painted were the door panels in gray so they could apply the number 84x decals. Add a few sponsor decals and the beast was ready.

In comparison to the other cars, all brightly painted and festooned with decals head to toe, their car came off deceptively plain.

In the pits no one was expecting anything too dramatic, as everyone who knew what they were doing (myself excluded) had an expertise in off-road, not dirt track like what they were attempting.

All they were hoping for was to just finish. So when J.C. won his second heat, we were all ecstatic.

For everyone who had put in a ton of sleepless nights, it was vindication for all their hard work.

Even though the night finished with what some people could consider a disappointing end, J.C. finishing 11th, everyone was happy with how the car performed.

The next night, Oct. 1, I was hoping for more good racing and I wasn’t disappointed. The American Stock class provides for a lot of rubbing, and crashing into each other. J.C. had a few extra dents after the qualifying heat, which led to a little bit of an altercation in the pits. Tension is high in this world and emotions get hot, so drivers giving another their two cents in an impolite manner isn’t uncommon.

In the main event there was a lot of good driving and great performance out of the Elrod car. Unfortunately, it ended with J.C. spinning out just before the final lap.

Again, while this could have been viewed as disappointing, the way the car and the driver handled made everyone happy and their wasn’t a sad face among us. Throughout the weekend others came over to take a look at the car, admiring the rugged and traditional aspect the car brought to the track.

Being a family affair, Jeff — who all of us call “Boss Man” — was prouder than I’ve ever seen him. Admittedly, he was a nervous wreck throughout the race. So to see his son come out unscathed after the nightmare six years before was an awesome sight. J.C. was proud of what he had done and to be a part of it.

To witness everyone come together to get that car on the track was the biggest thing he took away from the experience. So while Elrod Racing didn’t take the checkered flag that weekend, this was only the start in their venture into the American Stock Class. The Team motto “Build, Race, Win” is prevalent.

So if you’re ever free on a weekend and want to see a part of an old school American tradition, come out to the Santa Cruz County Fairgrounds and cheer on the number 84x Elrod Racing car, the local boys.