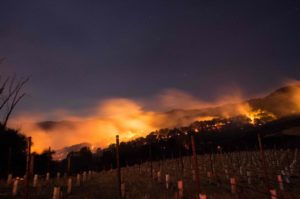 Photo courtesy city of Napa/Facebook
Fires ravaged Northern California as Gov. Jerry Brown declares a state of emergency in eight counties. The proclamation allows all state agencies to use and employ state personnel, equipment and facilities for response and recovery efforts.

Our prayers go out for our fellow Californians in the North Bay region who are facing the devastation of the deadliest wildfire seasons in our state’s history. As of the morning of Friday, Oct.13, the various fires still rage, with a confirmed death toll of 31 and reports of hundreds of people still missing.

Many of our men and women who work for CalFire in the South Valley traveled north and bravely faced the inferno that so far has devastated 180,000 acres, destroyed at least 3,500 homes and forced emergency evacuations in several counties. Also notable for their bravery are the local PG&E employees from Morgan Hill and Gilroy who put their lives on the line by traveling to the fire areas to help with power issues.

Winds blew the smoke south and the skies over Morgan Hill, San Martin and Gilroy turned sooty, causing Santa Clara County to issue an emergency air pollution alert. It was a minor and temporary inconvenience compared to what the people who lost loved ones to the fires and destroyed homes must now endure.

A major problem arose when emergency dispatchers were unable to deal with the seemingly endless calls for help. “Parents trapped in garage,” one call went out. “An elderly lady trapped,” went another. Communities have an array of systems designed to alert residents of the danger including text messages, phone calls, emails and tweets. Many people were asleep when the fire descended quickly upon their homes so never received warning. Authorities said those emergency alert methods will be assessed, looking into complaints that those warnings never got through to some because the fire moved so fast with the winds there was little time to warn residents of the approaching flames.

Sonoma County used various communication systems to try to alert residents of the approaching flames. Authorities decided against using a Wireless Emergency Alert, a widespread message sent to cell phones in the region, somewhat similar to the Amber Alerts issued for missing children. Officials concluded a broadly sent message might panic people not in danger, triggering unnecessary evacuations that would create traffic jams on the roads and highways and delay emergency vehicles.

Incorporating the use of communications is a discussion that might be smart to have here among our South Valley county and city elected officials with first responders. We also live in a fire-hazard area. In an emergency, a few minutes warning — or even seconds — can save lives. Recall 15 years ago the Croy Canyon Fire in September 2002 that burned more than 3,100 acres in the region west of Morgan Hill and Gilroy. It threatened 350 homes and imposed mandatory evacuations for residents of that region.

This season’s wildfires might serve as a strong encouragement for more Gilroy citizens to go through the Community Emergency Response Team training held on a regular basis. The CERT program educates people about disaster preparedness for hazards that may impact their area, and trains them in how to work with first responders in basic disaster response skills, such as fire safety, light search and rescue, team organization, and disaster medical operations. For more information, visit the Gilroy CERT Facebook at www.facebook.com/GilroyCERT.

“As we know from local experience, fires are not only devastating for families but overwhelming for a long time as they try to put their lives back together,” said John Hennelly, chief administrative office at St. Louise. “We are doing a clothing drive simply to help them over the immediate hurdle of having clothes to wear.”

If you would like to help, google “How to help Northern California fire victims.” There are hundreds of ways to help. Just make sure you are giving to a legitimate organization.

We thank all the many men and women who worked together to help the people who faced danger with flames — and now need to rebuild their homes and lives. Let’s also see the warning the recent fires give us in working to ensure public safety and the protection of property in South County.