Take a Hike . . . with Mike Monroe – Learn about the region’s viticulture history with walk at Solis Winery 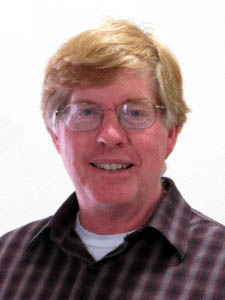 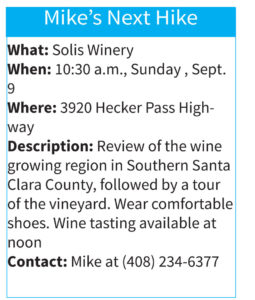 Writing about our local landscapes is such a joy. As a story in the Morgan Hill Times and San Martin News from 1971 reflected poetically: “We are indeed blessed and grateful for our good fortune to live in the southern aspect of the Santa Clara Valley — an Eden in the Valley of Heart’s Delight. It is classic wine land — with long, sunlit seasons gently ripening the finest fruits of the vine.”

Many authors have extolled the beauty and abundance of our valley including Charles L. Sullivan in his “Like Modern Edens” and Bev Stenehjem in her “Wineries of Santa Clara Valley.” And not an issue of our current lifestyle publications goes by without some mention of a local vineyard or new family winery. I must also salute the work of Steve Beck, Elizabeth Barrett and Cindy Adams for their local history discoveries.

It’s hard to imagine a better afternoon spent relaxing than with an aromatic, delicious glass of wine complimenting some fresh fruit and cheese, all the while enjoying the setting — rows of grape vines in season nestled against the hillside slopes. Our family is a member of several wine clubs because it is so convenient and inexpensive to travel just a few minutes and always receive a warm friendly greeting from the staff and owners of our local wineries. Sure, each winery is unique. And I do not identify anyone of them as a favorite. They are each special in their own way and the tasting profile is always fun to compare. 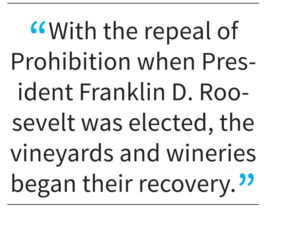 As usual, my style is to dig into the background of a topic as I prepare to write. And it has been immensely rewarding to learn more about the development of viticulture in the South Valley. We have such a rich history, too much to convey in one short column. So I decided initially to focus my attention on the Hecker Pass corridor and the Uvas Valley, and yet there were still too many compelling stories that I really feel should be remembered. Now my hope is that more vineyard tales will be forthcoming in the months ahead. For the first narrative then, I chose the opening pages of the Solis Winery because it has several behind the scenes twists and turns which I thought would be fun to highlight.

Today, the Vanni Family owns the Solis Winery on Hecker Pass. Thankfully, they have preserved its early landscape history. Mariano Castro and his family came to live on the Rancho de Solis, a parcel of two leagues (8,875 acres), in 1805 after Joaquin Solis was unsuccessful in his bid to be granted the property. Formal title to the ranch was granted to Castro in 1833, and 10 years later the family also was granted Rancho Las Uvas (the grapes). Both ranchos shared the Uvas Creek drainage with Rancho de Solis extending from the base of Mt. Madonna into Gilroy.

Much of Hecker Pass from Santa Teresa westward is a part of the original Solis land grant. Rancho Las Uvas and Rancho de Solis touch each other near the intersection of Day/Uvas Roads with Watsonville Road. The original hand-drawn map of Rancho de Solis, called a “diseno,” shows the original “casa” located about where Kirigin Cellars is today. The map identifies the first residence as belonging to the “el solicitante” or the applicant — the Castro family utilizing the Solis structure, perhaps made of adobe or redwood.

Shortly after the Gold Rush of 1849, John Hicks Adams, later the Sheriff for Santa Clara County, acquired much of Rancho de Solis and began to sell off parcels to the new arrivals. It is here we must recognize the investigative work of Ernest P. Peninou (1916-2002) who compiled, but never fully published, a history of California’s viticultural districts including those in Santa Clara County. He noted that the “first winery of any size near Gilroy was operated by Charles Francois, an Alsatian who arrived in the Rancho de Solis area in 1868 near the intersection of Redwood Retreat and Watsonville Roads.

In the early 1880s, two English relatives, by the last name of Hague, bought some 50 acres near the intersection of Day and Watsonville roads setting out a wide variety of grapes and naming the vineyard ‘the Solis.’ In 1889, they saw the need for a new and larger winery than any yet built in the vicinity. A cooperative was formed with other local growers and they organized the Solis Winery and Fruit Company. The winery was constructed above the vineyard, which sloped up from the road by tunneling into the hillside to provide storage cellars of even temperature.” This vineyard was later purchased by the Bonesio family (now Kirigin Cellars).

With the 18th Amendment ratified in early 1920, Prohibition was the law of the land. Our local wineries were not immune to the raids, seizures and general corruption during this time and many winemakers went out of business. With the repeal of Prohibition when President Franklin D. Roosevelt was elected, the vineyards and wineries began their recovery. While the Solis Winery and Fruit Company has disappeared, the Solis name was rejuvenated by Ezio Scalmanini who operated his winery on Watsonville Road near the Bonesio’s from 1939 through 1970.

The Solis story will have to be continued. The Bertero family, who planted the vineyard we know along Hecker Pass, and the wave of Italian immigrants, who immigrated to Gilroy in the early 1900s, are certainly worth a column. Plus, it was the Vanni family who kept the Solis Winery name alive. I hope to see you Sunday Sept. 9 at Solis. We’ll have a lively conversation on our grape history.

Gilroy resident Mike Monroe is a Morgan Hill business owner and naturalist. He is a docent for Santa Clara County Parks.