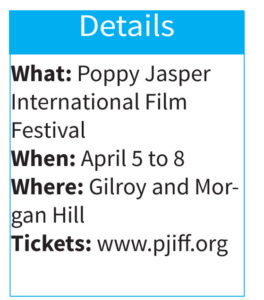 “The movies are like a machine that generates empathy,” the Chicago Sun-Times film critic Roger Ebert said. “It lets you understand a little bit more about different hopes, aspirations, dreams and fears. It helps us to identify with the people who are sharing this journey with us.”

The Poppy Jasper International Film Festival, opening for a five-day run April 3, has grown during the years into a community and cultural event for the South Valley. It brings people together to celebrate stories on screen that help us better understand each other as human beings.

This year’s festival, the 14th annual, builds on last year’s event, which thanks to a team of volunteers led by Gilroy High School alumn and filmmaker Mattie Scariot was an amazing success, hosting more than 3,000 people including hundreds of visiting filmmakers who enjoyed 90 films from 28 countries.

We’re excited to see what this year’s films might offer in capturing our imagination and taking us to other worlds via the vehicles of projected light and stereo sound. We see the festival growing in coming years to bring greater awareness to our region as a cinematic cultural center for independent filmmakers.

Gilroy native Randy Spendlove, who now works as president of the Motion Picture Music department at Paramount Pictures, will return to this year’s Poppy Jasper to share his stories and perform his music. 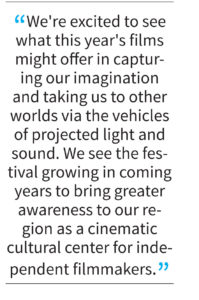 Another Gilroy-born filmmaker will have his movie shown at this year’s festival, a poignant one about the mental struggles American military men and women must face after they come back home. “PTSD: An American Tragedy” was made by U.S. Army soldier Carlos Lopez, Jr., who died by suicide last June after suffering for years of post-traumatic stress disorder.

What we love about the Poppy Jasper is that it has a mission to keep filmmaking local. It’s not about Hollywood stars and autographs. It’s about ordinary people who have a passion for the movies. So we’re even more excited to see the cinematic creations of local people who have gone through the Poppy Jasper’s education program to venture into filmmaking. The Poppy Jasper has partnered with local organizations including CMAP, the Morgan Hill and Gilroy libraries, YMCA Silicon Valley and Gavilan Community College to put on these workshops.

Along with the shorts from the Young Filmmaker Workshop where children get to experiment with stop-motion video and other fun techniques, the organizers have brought back the Millennials’ Music Video where teens get to tell a story to a tune and the 40&Up Filmmaker Workshop where middle-aged locals get to show off their creation. New this year is a 70&Up Workshop for senior citizens to learn filmmaking. These workshops are an exciting way for locals to express their views of life and the world.

The Poppy Jasper will also celebrate local people who have played an important part in making the South Valley region a good place to leave. 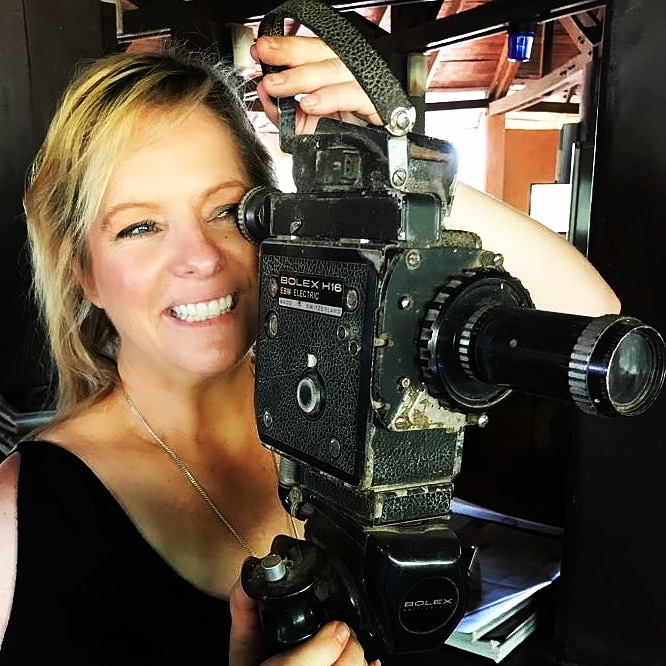 Three prestigious Poppy Jasper Community Achievement awards will be presented Sunday, April 7, at the Granada Theater in downtown Morgan Hill. David Cox, the executive director of St. Joseph’s Family Center, Cecelia Ponzini, the co-founder and board chair of the Edward Boss Prado Foundation, and Karen Seeker, a past board president of the Wineries of Santa Clara Valley, will be honored.

The science of cinema got its start in Santa Clara County in 1872. On the grounds of what is now Stanford University, English photographer Eadweard Muybridge conducted an experiment with a horse trotting along a track to develop his pioneering camera work on motion. He later developed motion-picture projection using what he discovered.

Since then, film has evolved as a fantastic form of art and entertainment. It takes long hours of hard work to produce a movie that can transport us to another place and time or open our eyes to see the world from a fresh, exciting, and enlightening perspective.

The cinematic arts can empower us to better understand not just ourselves but other people with whom we share this planet. And local film festivals like the Poppy Jasper open the door for an audience to explore the less commercial — but no less interesting — movies produced independently outside of the Los Angeles-based studio machines.

We applaud Mattie Scariot and the team of Poppy Jasper International Film Festival volunteers who throughout the year dedicate thousands of hours to putting together our South Valley event. And we encourage all South Valley residents who might never have gone to a film festival to treat themselves to some fun and check out one or two of the blocks of films at this year’s festival. You’ll meet some of the most interesting filmmakers in the world and explore with them the magic of making a movie.

If you would like to share your thoughts about this editorial, please email Robert Airoldi, the Gilroy Life editor, at editor@GilroyLife.com or call him at (408) 427-5865.