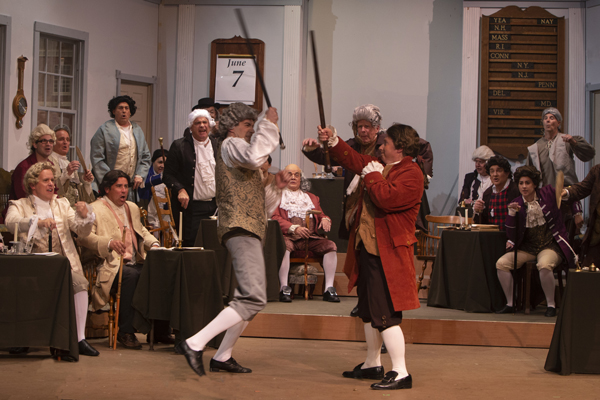 Like the hip-hop musical that’s now packing in New York City theater-goers, “1776” was considered by critics a longshot when it premiered a half century ago. Who would have ever thought back in March 1969 Broadway audiences would want to see a story of the Founding Fathers of America debating through song and dance the writing and signing of the Declaration of Independence? It turned out plenty of people did. The musical “1776” ran for 1,217 performances in its original run, gathering three Tony Awards including “Best Musical.” 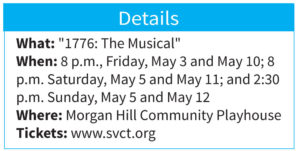 The South Valley Civic Theatre opened “1776” April 26 at the Morgan Hill Community Playhouse as part of its 50th-anniversary year season. Local residents who catch the show might wish to focus on the gentleman on the stage wearing a bleach-white wig and carrying a silver-tipped cane who sits at the Pennsylvania delegates table between Ben Franklin and John Dickinson. That would be yours truly playing the small but pivotal role of Judge James Wilson.

One Saturday morning a couple of months ago, at the encouragement of several friends I tried out for the role of Dr. Lyman Hall, a delegate from Georgia in “1776.” Hall’s balanced habit of looking at both sides of an issue seemed to fit my character. At the audition, the musical’s director Colleen Blanchard asked me to read lines spoken by Judge Wilson at the climax of the story when it’s uncertain where the vote for independence might go. Despite an initial reluctance to take on the character of Wilson, I found myself agreeing to play this part. Thus began the journey of many nightly rehearsals where I’ve been practicing my lines, attempting to sing thanks to the patient instruction of vocal director Terry Sodergren, and minueting on stage along with the prim and proper conservative delegates to “Cool, Cool Considerate Men” (choreographed by the talented Christine Carrillo.) 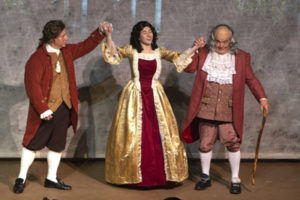 It was in my high school years when I first saw the film version of “1776” on TV. It changed my perspective of how to view our nation’s story.  American history isn’t about memorizing dates and the signing of parchment carrying documentation no one bothers to read anymore. “1776” showed me history is about people. It tells the story of the flesh and blood humans who engage in the drama of their age to change the world. After watching the film, whenever I felt bored of the teacher’s droning in my U.S. history class, I would step in my imagination into the world those leaders inhabited. Through the magic of my mind’s time machine, I discussed with historic figures the dilemmas of their day. I might find myself chatting with John Adams, Thomas Jefferson and Ben Franklin, debating the long-shot odds of the colonies winning a revolutionary war with Britain, the world’s mightiest military power. Or I might converse with President Abraham Lincoln, seeing him carry the heavy weight of the Civil War’s dead for a noble cause of ending slavery. 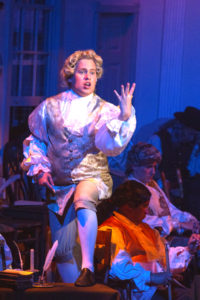 The theme that marches throughout American history is the pursuit of freedom for all. We’ve come a long way with our nation’s quest for liberty. We still have far to go. And theater and film can help us better understand the people who have come before us and truly appreciate their struggles. But beware of taking theater as the literal truth. Sherman Edwards and Peter Stone who developed the show “1776” took some dramatic license with the facts and the development of the characters. The most obvious is that a theater stage would not have been able to practically hold all 56 delegates who were present at the Second Continental Congress that contentious summer in Philadelphia. The delegates are reduced to less than half that number, with many becoming composites of several historic figures.

Despite the liberties taken, the show can serve as a launching point for more exploration of the humanity of these astonishing men — and women (Abagail Adams and Martha Jefferson come into the story in short scenes) — who play parts in the American origin story. In researching the character of James Wilson, I found a man of incredible intellect and imagination who rarely is mentioned in the history books and yet played a pivotal role in our nation’s founding. Wilson later played a role in the creation of the U.S. Constitution, promoting the radical idea of popular sovereignty, exemplified by the three bold words of that legal document: “We The People…” 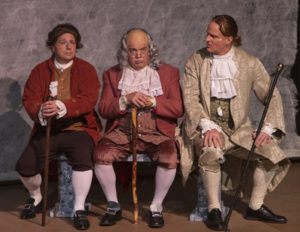 I encourage South Valley families to bring their middle-school and high-school aged teens to see history come alive in “1776.” My hope is some of the themes of the show might ignite conversation on the political issues we face today.

The SVCT’s production of “1776” is a fun way to discover our nation’s history and get a glimpse of the humanity of many of the men and women who shaped the document that gave birth to our nation — including “wimpy Wilson,” played by yours truly.