The annual party for all that’s garlic is inviting teams of local first responders and military professionals, and young chefs to compete in two cook-offs at the 2019 Gilroy Garlic Festival.

First responders and military personnel will compete in the fourth annual “Champions for Charity” challenge, a three-round cooking challenge Friday, July 26, to win $3,000 for the charity of their choice. 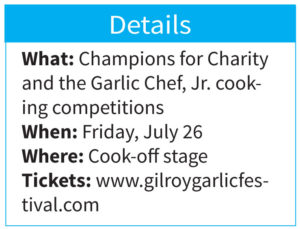 Four teams of two will be selected to compete in three elimination rounds including appetizer, entrée, and dessert. After each round, a panel of judges will evaluate taste, creativity, appearance and use of garlic to determine who will move on to the next round. The winning team will get the ultimate bragging rights — and will be awarded $3,000 to donate to a charity of their choice.

“We love having this event kick off three days of intense cooking competitions on the Garlic Cook-Off Stage,” said Denise Buessing, co-chair of the 2019 Gilroy Garlic Festival Recipe Contest Committee. “It’s amazing to see what our community heroes can do in the kitchen.”

Local firefighters, police officers, EMS professionals and military personnel are encouraged to apply for this event in teams of two. Both parties competing must be non-professional chefs. Online applications can be found at gilroygarlicfestival.com and must be submitted by May 1.

Building on the success of last year’s inaugural Garlic Chef Jr. cooking competition, the challenge for kids will return. Young chefs ages 9 to 18 are encouraged to apply by May 1 to compete on the Garlic Cook-Off Stage. MasterChef Season 9 Winner Gerron Hurt will serve as emcee for the event.

Each contestant must create one cooked or baked dish using his or her own original recipe containing at least six cloves of garlic. Chefs will have two hours to prepare their dishes on the Garlic Cook-Off Stage and are allowed to have one adult (non-professional) sous chef on stage to assist them. A panel of expert judges will evaluate each dish for taste, appearance, creativity, and use of garlic. The winner will be presented with a gift valued at $500.

“We learned last year that we have a lot of talented young chefs in our community, and it was so much fun to see them,” Buessing said.

The inaugural Garlic Chef Jr. contest was won by Addison Dell, who wowed the judges with her Garlic Mac N Cheese with Crispy Garlic Chicken Tenders and Roasted Asparagus.

Aspiring young chefs (as of July 26, 2019) are invited to apply by completing the online application. For more information, visit gilroygarlicfestival.com.

Finally, MasterChef Season 9 winner Gerron Hurt will appear at the 2019 festival Friday, July 26. Hurt will serve as Master of Ceremonies for both the Champions for Charity challenge and Garlic Chef Jr. competition and will also perform his own cooking demonstration on the Garlic Cook-Off Stage.

Since being announced by Gordon Ramsey as the MasterChef Season 9 winner in 2018, Chef Gerron has combined his passions for teaching and cooking by encouraging others to create their own unique recipes through his subscription-based website. He now resides in the greater Nashville area with his fiancée and continues to travel for appearances and speaking engagements.

He believes strongly that “food is that one common denominator that binds humanity together.”

For additional information, including applications for cooking contestants, go to www.gilroygarlicfestival.com.