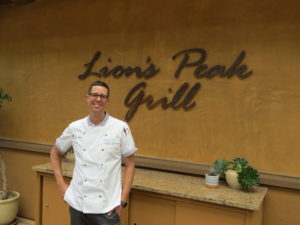 Alexander La Motte will get a taste of the stinking rose at his first Gilroy Garlic Festival this July. A newcomer to the South Valley, the Rosewood CordeValle executive chef will emcee the famous Garlic Showdown for professional chefs on the Garlic Cook-Off Stage Sunday, July 28.

When I met him at the clubhouse of the San Martin golf resort, we chatted about his passion for cooking and how it was a skill he learned to love out of necessity.

His mom would be out working so his responsibility was to prepare meals for his family. In second grade, he separated the parts of a chicken by himself. He intended to braise it with paprika, but accidentally used cinnamon. “I tried wiping it off and I couldn’t do it,” he joked. “There’s nothing you can really do to turn it around.”

La Motte grew up in Rockford, Illinois and went to University of Wisconsin in Madison for biomedical studies. It wasn’t an option at the time to attend a culinary academy, but he worked at a sous chef at a restaurant. He had to make a decision- whether to follow his passion of cooking or do what he studied.

“One of my friends, after me complaining about it for a number of months, was like ‘shut up and do it,’” he told me. “So I did. I went to upstate New York and trained at the Culinary Institute of America.” 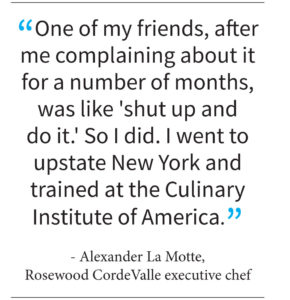 In January 2019, he was appointed executive chef at Rosewood CordeValle to bring his signature contemporary American style to the resort’s three culinary destinations: Il Vigneto, Lion’s Peak Grill and One Iron Bar.

With his mathematical mind, the chef enjoys the process of creating new dishes. For him, it’s like an “equation” of balancing the sweet and sour flavors such as vinegars and sugars until he gets that perfect depth, dynamic, and textures he’s looking for. He doesn’t like sitting still, so it makes sense for him to experiment with new ingredients.

His culinary adventures are colored by his Brazilian heritage. Although he was born in America, he has dual citizenship. He draws ideas for his menu from everywhere, he told me. But the influence of Brazilian grandmother and mother is apparent in his cooking style. In his last eatery, his diners enjoyed a beijinho, a traditional desert from the South American country.

“It’s like a little truffle in Brazil, or a brigadeiro. I did a version over there and I might bring it here as well,” he said. “It’s essentially reduced condensed milk with cocoa powder made into a truffle type of thing, extremely delicious and rolled in coconut.”

What inspires him at CordeValle is the diversity of produce in the South Valley. At the resort, among the golf greens, they grow beets, radishes, carrots, and peppers, which he brings into his menu. He likes pickling them and using the peppers to make hot sauce. The beehives on the property provide local honey for his kitchen.

He is now working on creating a trademark dish and an “identity” for each dining venue at CordeValle, Il Vigneto, One Iron Bar, Lion’s Peak Grill, and A Sense of Taste.

“To me, if you are a bar, you need to have a signature burger,” he told me. The signature One Iron Burger has grilled onion, lettuce, pork belly, gruyere, and smoky special sauce.

He and his wife make sure their two children, ages  5 and 7, learn to appreciate a variety of different foods and enjoys teaching them basic cooking techniques in their Gilroy home’s kitchen. His daughter helps by chopping veggies and making fresh pasta, meatballs, braised meats, or fresh tortillas and tacos.

“Anything my kids want to make, we make it all together as a family,” he said.

At the Garlic Festival, La Motte will put his years of restaurant experience into emceeing the four chefs competing in the Garlic Showdown, a contest which was inspired by TV shows like “Iron Chef.”

Each chef must use a “top-secret ingredient” (not revealed until the competition begins) to prepare two entrees and side dishes. Judges will determine the winner based on presentation, originality, flavor, texture, and use of the secret ingredient. The winner receives a $2,500 prize.

“I think the Garlic Festival is a really cool idea,” he told me. “Essentially, it’s all about volunteered hours that go back to the community, which I think is a super cool idea. I’m very proud to be a part of it.”

I found so eye-opening for someone to take a risk with their life and follow their passion instead of just doing a career because they got a degree in that field.

Chef La Motte has so many fun stories from his years of working in the dining industry so if you’re at the Garlic Showdown, you’ll no doubt hear some of them.

Guest Column
This guest column represents the views of the writer and not necessarily that of Gilroy Life. If you're interested in writing a guest column for this newspaper, please email the editor at [email protected]
Latest posts by Guest Column (see all)
Guest Column2019-07-19T00:00:00-07:00