About 50 kids participated in the training program 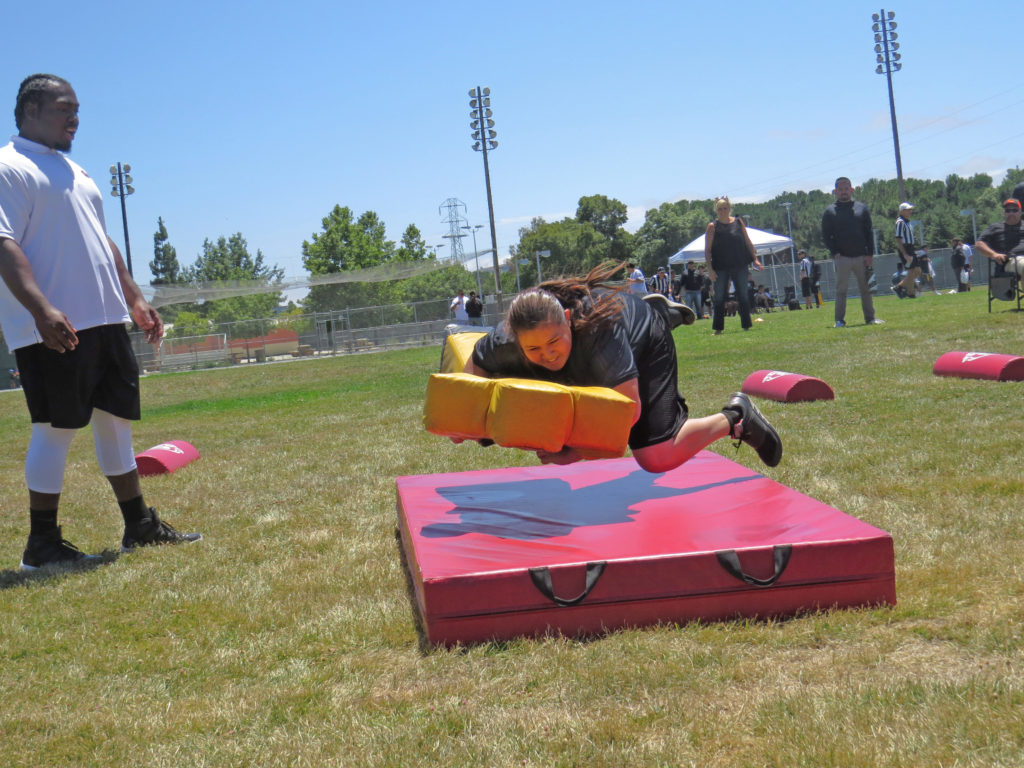 Photo by Marty Cheek
Michelle Maquinalez, an 18-year-old Gilroy resident, tackles a dummy during the Pro-Com event at Community Park in Morgan Hill.

Pros from the San Francisco 49ers team paid a surprise visit July 19 to Morgan Hill’s Community Park where they trained about 50 at-risk youths, including some from Gilroy, in drills to build their football skills.

The visit was part of the 49ers PREP Youth Football League’s involvement with the Probation-Community Athletic League flag football program, which is organized through a partnership of the Santa Clara County Probation Department, the South County Youth Task Force and Empowering Our Community for Success. 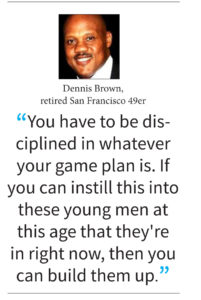 The young people met 49ers’ Super Bowl champion Dennis Brown and defensive lineman Ian Williams, both retired from the team, as well as current offensive lineman Ben Garland. The three 49ers gave them instructions on running, throwing and tackling and gave them encouragement as they went through the drills.

Among the youths who participated in the special training was Benjamin, 17, an Eastside San Jose resident who has a passion for football.

“I’ve only been involved in this program for about a month,” he said. “I’ve played football mostly all my life. I got into football in second grade playing tackle football and I’ve always been a team leader. So I came out here and have tried to lead this team.”

At first, he was uncertain who the men standing on the sidelines were as he and others warmed up for a friendly flag football game.

“I’m starting to recognize little by little where they come from,” he said. “Training with them, it makes me feel good. It makes me want to jump on that, yes, sir! I try to lead a team because that’s what I think I’m the best at.”

Williams has been involved in the 49ers community services activities since he was a rookie. He enjoys helping young people push themselves beyond their comfort zone and develop good habits and behaviors through positive role modeling.

“We’ll get them out here having some fun and some sun with some friends and getting them doing some things that are different that are outside of their norms,” he said. “Being out here, we’re showing these kids that they matter. Maybe they need to see that. Mentor-wise, if they see me doing something well, I hope that they might mimic that.”

One reason Williams stays involved is because he received positive mentorship in his teenage years from various teachers and coaches in middle school and high school while he was growing up in Florida.

He met professional players from the Orlando Magic team who helped him build his skills through junior sports camps.

Brown also sees the potential of the program to inspire at-risk young people — both girls and boys — to learn life-skills through involvement in football. The key is to teach them to look at the challenges of the game with a positive attitude, he said.

“I’m a little biased about football,” he said. “I think football is great for teaching a lot of things that transfer into the real world: teamwork, hard work, work ethic, having a team counting on the person next to you, communication. I think it’s just a positive thing for young men. It helped me so much. I was missing a lot in my life in not having a father or a role model.”

The discipline and focus developed in an individual in learning to play the game well and building solid athletic skills can help build success in later years, he said.

“If you get involved in a sport and continue it through high school and college or even the pros as I did, you develop a discipline,” Brown said. “And it transfers into real life. It’s about the discipline. You have to be disciplined in whatever your game plan is. If you can instill this into these young men at this age that they’re in right now, then you can build them up.”

Nezam Etemadi serves as the manager of the 49ers PREP Youth Flag Football.

The program was started in 2018 with eight leagues and 514 young people. The team partners with nonprofit organizations to train nearly 3,000 young people in 37 leagues throughout the Bay Area as well as Sacramento.

“We really want to be an avenue for kids who are not familiar with football,” he said. “Kids who don’t play youth football and are kind of intimidated by the whole competitive thing. We are non-competitive. We don’t keep score. We just want to have kids come out and have fun and learn the fundamentals of the sport — learn about sportsmanship, how to cooperate with other people, and work as a team.”

The program is co-ed with about 15 percent girls participating. The first touchdown ever in 2018 for any of the leagues was a girl quarterback to a girl receiver through the Santa Clara PAL program. (PAL stands for Police Activities League.)

“Girls are a big part of our program,” he said. “We’re definitely trying to raise the number of girls in our program. They’ve been fantastic.”

On the grounds at Community Park, the 49ers gathered with the youths as they prepared to play a quick game of flag football. Jennifer Daughenbaugh, a deputy probation officer with the Santa Clara County Probation Department and Pro-Com’s director, introduced the pro players and encouraged the young people to take advantage of the learning experience.

The young people shook hands with each other and the players and they all met with hands outstretched and gave a big cheer as they started the game.