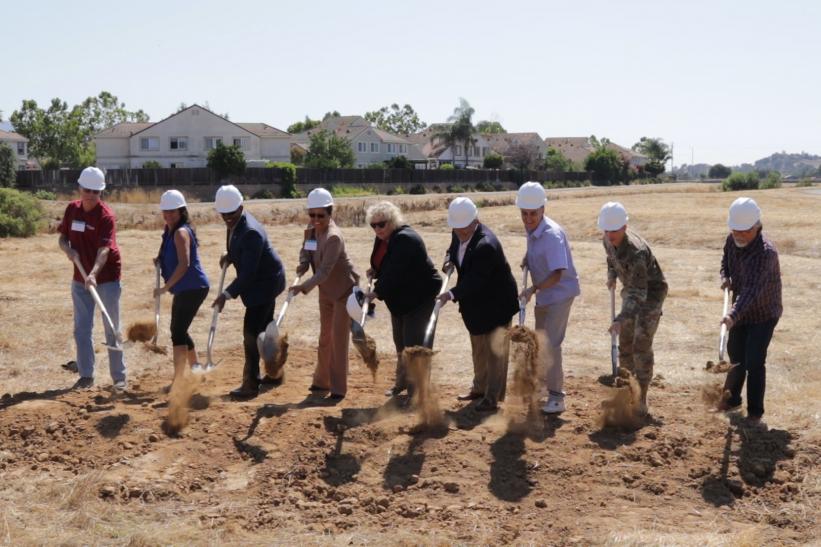 A flood control project decades in the making broke ground last week that when completed will protect 1,100 homes, 500 businesses and more than 1,300 acres of agricultural land.

Known as the Upper Llagas Creek Flood Protection Project, it began during the Eisenhower Administration. Local, regional and state politicians during the decades worked with Congress and in concert with the U.S. Army Corps of Engineers to get the project built. 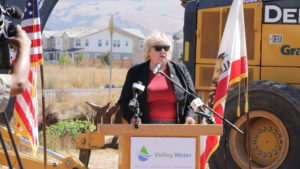 “This has been a project that has spanned decades,” Congress-member Zoe Lofgren (D-San Jose) said to the assembled crowd near La Jolla Drive in southwest Morgan Hill at the Aug. 28 groundbreaking. “There were times I thought this day would never arrive, honestly.”

She said that when her district boundaries were changed, she continued to work with Congress-member Jerry McNerney (D-Stockton) to lobby for funds to complete the project. Former Morgan Hill mayors Dennis Kennedy and Steve Tate also worked with Santa Clara County Supervisors Don Gage and Mike Honda to keep the project alive. It was finally approved earlier this year.

The $180-million project is divided  into two phases. The first phase of 4.2 miles spans from between Buena Vista Avenue in Gilroy, to north of Lena Avenue then west under U.S. 101. It will also include the rehabilitation of Lake Silveira in southwest Morgan Hill. That will entail the creation of about five acres of islands and freshwater wetlands and the restoration of 2,000 linear feet of Llagas Creek back to the original channel for federally protected steelhead trout. The wetlands will be constructed with islands for wildlife refuge and will include basking sites for the native turtles that inhabit the lake. Invasive vegetation that have degraded the native riparian vegetation will be removed and replaced with native vegetation.

The 9.7-mile Phase 2 will complete the project. It is expected to begin in the spring of 2020.

In November 2012 the voters of Santa Clara County overwhelmingly approved Measure B, the Safe, Clean Water and Natural Flood Protection Program, as a county-wide special parcel tax for 15 years that is providing $37.1 million. This program replaced the Clean, Safe Creeks and Natural Flood Protection Plan, which voters approved in November 2000 that funded $17.3 million. In addition, the federal government provided $54.4 million, the city of Morgan Hill $3 million, the California Department of Water Resources State Subventions program $32 million and the Watershed and Stream Stewardship $40 million.

“Like many of you, I vividly remember the aftermath of some of the major flooding incidents in Morgan Hill over the years,” said John Varela, Valley Water Board of Directors representative for District 1 and a longtime resident of Morgan Hill. “I want to say thank you to Santa Clara County voters for approving Measure B, the Safe, Clean Water and Natural Flood Protection Program.”