Symphony’s opening concert will feature music from the silver screen

Evening will conclude with composition written by Gav music instructor 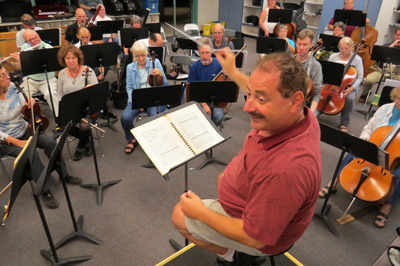 The 2019-2020 season’s theme will focus on the “spirit of music” in four concerts, sharing with audiences how the spirit of symphonic music takes various different types of forms, said Anthony Quartuccio, the SVS’s conductor and music director.

The first concert focuses on how music can portray “light.” The orchestra will put a spotlight on the college with the finale of the evening with “Gavilan Spirit,” a composition written by the accomplished jazz pianist Dahveed Behroozi, who also teaches music at the Gavilan.

Gavilan student Christopher Niemann wrote the orchestration of the composition and Behroozi will do a jazz improvisation on the piano as the orchestra musicians perform. 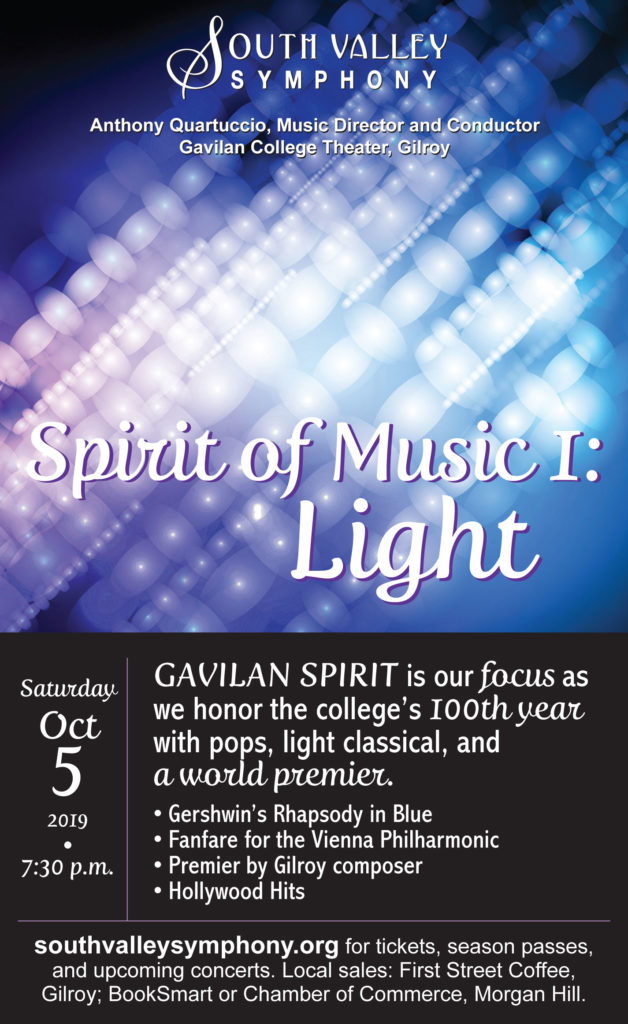 “This piece shows the wonderful synergy between the orchestra and the college,” Quartuccio said. “I think it’s going to be really interesting. Niemann’s orchestration is really good. It’s really full and rich but doesn’t get in the way of the piano solo at all. It really compliments the solo.”

The season opening concert usually serves as a pops concert with movie music performed as well as popular pieces. It will open with Richard Strauss’s “Fanfare for the Vienna Philharmonic.”

“I love the piece. The brass players wanted to do it,” Quartuccio said.  “And I thought, what a wonderful way to open up the concert with this short masterpiece that will put everybody in the mood for a great concert.”

Scores from Hollywood films that will be performed are “Lincoln,” “The Mission,” “The Sea Hawk,” and “1941.”

“This is a combination concert that will feature music from the silver screen,” Quartuccio said. “We’ve got some wonderful movie music, some masterpieces that have not been heard for a while, some classic ones that we’re bringing back by popular demand.”

The rousing “Rhapsody in Blue” by George Gershwin will be included in the concert with Russell Hancock, the accomplished pianist of the St. Michael  Trio performing.

“In a way, it’s a celebration of America and our education system, we thought this would be a perfect piece to bring back,” Quartuccio said. “We thought, why don’t we perform the number one most important jazz fusion piece ever written, and that’s Rhapsody in Blue.”

The symphony’s holiday concert continues the spirit of music theme Dec. 14 with a musical program that will include seasonal favorites and classical sounds with the talent of singers Sandra Marlowe and Ted Sanchez. Sanchez will narrate the classic poem “A Night Before Christmas” with a full symphony orchestra.

“That will be really fun,” Quartuccio said. “We haven’t had a narration for the holidays for a long time, and he’ll be really great at that.”

The orchestra will perform back to back two versions of the popular “Sleigh Ride.” The first is the more commonly known one written by Leroy Anderson. The second version will be one that was written by Leopold Mozart, the father of Wolfgang Mozart. It has a similar look and feel, except in an early classical style.

Also at the holiday concert, the orchestra will perform Tchaikovsky’s Symphony No. 2, called “The Little Russian.”

“Everyone always plays Tchaikovsky for the holidays, but we thought instead of doing ‘The Nutcracker’ or ‘Swan Lake,’ we actually wanted to play one of his symphonies for the holiday,” Quartuccio said. “The orchestra actually requested it. So when the orchestra requests the music, then you know they’re going to play their hearts out because they really want to do it.”

The symphony’s NextGen concert, which will be held March 7, continues the spirit of music theme with a solo performance by the first-place winner of the annual Navaroli Young Musicians Competition. A date for this prestigious competition organized by SVS will be announced later but will most likely take place in early January.

The concert will include “The Poet and Peasant Overture” by Franz Von Suppe as well as a special composition by a Gavilan student based on a best-selling book set in the land of Oz.

“We’re going to have a world premiere symphony written by Christopher Niemann, which is based on the literary idea of ‘Wicked,’” Quartuccio said. “It’s not based on the Broadway show but on the literary piece. The idea here is to continue the celebration of Gavilan College’s 100th anniversary. We have an alumnus from Gavilan writing a full symphony orchestra piece and dedicating it to the South Valley Symphony.”

The composition was inspired from Niemann reading the novel “Wicked: The Life and Times of the Wicked Witch of the West” written by Gregory Maguire.

The SVS season closes with the Mother’s Day Concert May 10 at Guglielmo Winery. This concert’s theme will be “amour,” with pieces reflecting Latino and Spanish cultures. Pieces performed will include selections from the George Bizet opera “Carmen,” a “Huapango” Mexican folk dance piece by Jose Pablo Moncayo, and “A Tribute to Tango” by Astor Piazzolla. Accomplished guitarist Michael Bautista will perform with the orchestra Joaquin Rodrigo’s “Concierto de Aranjuez,” a beloved Spanish composition.