One of student’s ancestors, 18-year-old Horatio Farnham Lewis from Erie, Penn., was mortally wounded on the second day of fighting at Gettysburg. 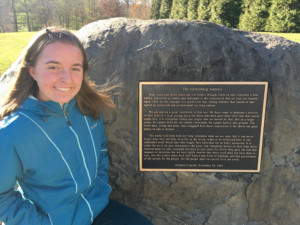 “We here highly resolve that these dead shall not have died in vain — that this nation, under God, shall have a new birth of freedom — and that government of the people, by the people, for the people, shall not perish from the earth.”

These words from Abraham Lincoln’s Gettysburg Address have stayed with me since I first heard them when I was four years old. In eighth grade, my history teacher tasked us with an offer of extra credit to memorize the famous speech. It was a task I eagerly completed. One of my ancestors, 18-year-old Horatio Farnham Lewis from Erie, Penn., had been mortally wounded on the second day of fighting at Gettysburg. Like so many other American families, my ancestors had been torn apart by the Civil War. They had lost more than 10 of their loved ones in the gruesome struggle. In the words of Lincoln’s Gettysburg Address, I found solace. I believe my ancestors would have found solace in the words as well.

In early August, I was awarded one of two student scholarships to attend the Lincoln Forum in Gettysburg, Penn., in November. At the event, I was treated as family, warmly accepted, merely for being myself. With my mom, I attended the Dedication Day Ceremony held each year to commemorate Lincoln’s delivery of the Gettysburg Address on the afternoon of Thursday, Nov. 19, 1863. (We later visited the graves of those who had served in the Union Army with my ancestors.) Listening to Lincoln interpreter George Buss recite the speech, the words seemed more real for me than they had ever been before. 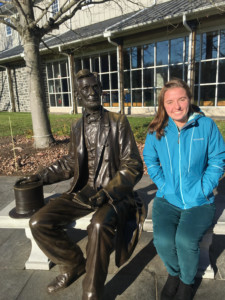 The beauty of the speech lies in its simplistic phrasing. Lincoln managed to convey more emotion and reverence for the dead in two minutes than Edward Everett, the main speaker prior to the president, did in two hours of oratory. The gentle reassurance that: “The world will little note, nor long remember what we say here, but it can never forget what they did here,” brought comfort to the thousands whose fathers, husbands, sons, and brothers had perished on the hallowed fields of Gettysburg. The succinct promise that “these dead shall not have died in vain,” helped to soothe the aching hearts and comfort a nation enduring the unfathomable.

At its core, the oration serves to “bind up the nation’s wounds,” as Lincoln put it in his Second Inaugural Address, and to dedicate the Soldiers’ National Cemetery for those killed in the merciless clash at Gettysburg. “In a larger sense,” it served as a memorial for those “honored dead.” It was an attempt to soothe the ceaseless pain felt by their families. In a world where the brilliant flower of youth had been plucked from many, and the light of optimism had nearly vanished, Lincoln’s words provided a faint glimmer of hope. A speech could never replace the lives that had been lost, as nothing ever could, but it gave the promise of a peaceable future —  a future of a united nation. Through his words, Lincoln assured our nation that the thousands of lives stolen by the Civil War were not taken in vain. Those lost on the battlefields would be honored and remembered for years to come as their country’s saviors. 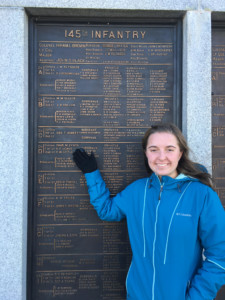 The mourning nation did not need another speech on the atrocities of slavery nor on the necessity of preserving the Union. The nation needed evidence the price — their many sacrifices — would not be endured in vain and that the bill would not come due with a vengeance. The American people did not need passionate declarations of embittered resolve. They needed words of consolation and compassion. A grieving people, Americans craved words to begin the long road to recovery. No words could have begun this healing process more eloquently than those words delivered by President Lincoln at Gettysburg.

Danielle Russell is a junior at Christopher High School.

Guest Column
This guest column represents the views of the writer and not necessarily that of Gilroy Life. If you're interested in writing a guest column for this newspaper, please email the editor at [email protected]
Latest posts by Guest Column (see all)
Guest Column2019-12-21T15:29:46-08:00