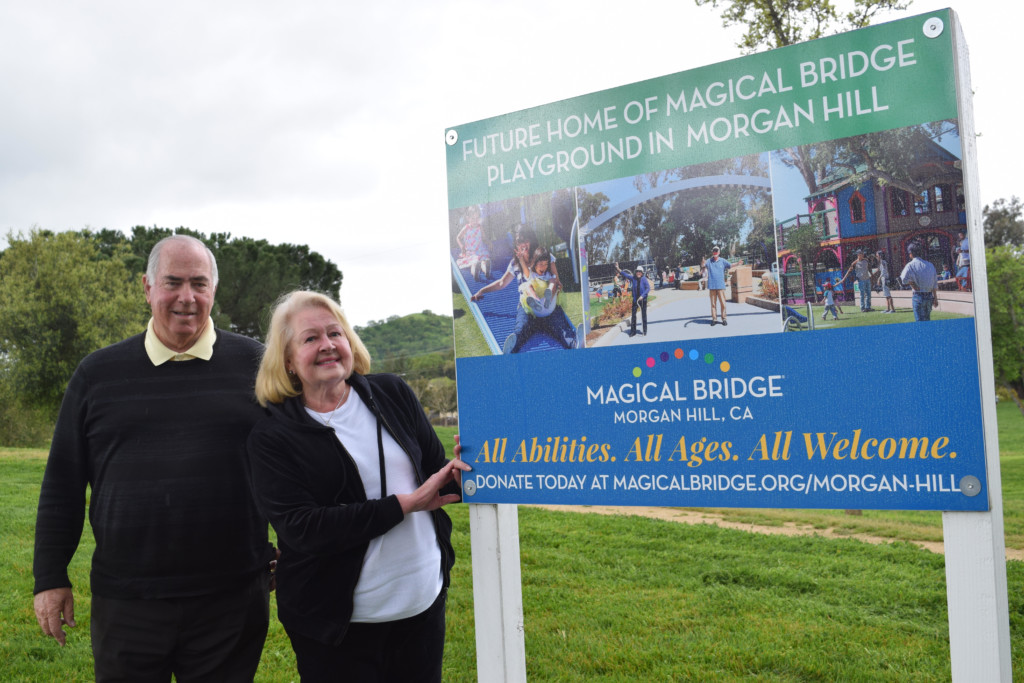 Ron Locicero sat at the dais in the Morgan Hill Council Chambers ready for the Nov. 12 Parks and Recreation Commission meeting. He was surprised when Brittney Sherman from the Morgan Hill Chamber of Commerce stepped up carrying a bouquet and a plaque.

She explained that the Chamber has an annual award dinner where selected community members are recognized for their contribution to Morgan Hill.

“It’s my great pleasure to announce that Ron Locicero is our 2020 Man of the Year,” she said. 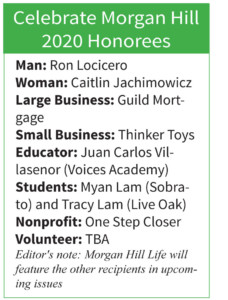 As cheers and applause rang from the audience, the retired educator sauntered to the front of the room. Sherman presented him with the flowers and plaque and gave him a congratulatory hug.

“He was selected this year as Man of the Year for the wonderful work that he’s done here and for Magical Bridges,” Sherman explained.

For several years, the Lociceros have worked with the Palo Alto-based nonprofit Magical Bridges, the city of Morgan Hill and a team of volunteers to build an inclusive playground in Community Park. Through their efforts, $5 million was raised to fund the project, which is expected to start construction in spring. It will serve the entire South Valley region.

“This should be going to the group that did this, especially my wife. It was her idea (for the playground),” Locicero told the audience with tears in his eyes. “She was the one that kept me going, kept me doing what I needed to do. When things got bad, she was there to build us up. I’m shocked. Last time I won an award, I was in high school and I had hair.”

Locicero and his wife, Shirlee, began planning the Magical Bridge Inclusive Playground project in 2014. The couple dreamed of seeing children of all physical and mental abilities playing together. They were launched into taking action when inspiration struck one night while they watched a news story on Tatum’s Garden, an inclusive playground in Salinas.

“This is a particularly good time to build an inclusive playground because you hear a lot in the media about inclusivity,” Shirlee explained. “There is much more interest than there ever has been in inclusivity.”

As a retired educator, Shirlee was especially inspired by the idea of South Valley children having an inclusive playground to stay active and make friends.

“One of the things I noticed when I was teaching elementary school was that so many of the children with special needs had nothing to do on the playground,” she said. 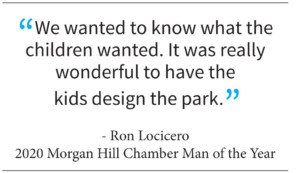 Shirlee wanted all her students to play together. She taught her classes about respecting differences in people, hoping all the children would feel included.

“I saw that there was really a need for understanding people with special needs,” she said. “I had a collection of books that I would read to the children explaining how all people are different.”

From her lessons, Shirlee watched as her students began to include everyone while playing at recess.

The Lociceros wanted to create a fun and friendly park that welcomes everyone. They took their designs to the local elementary schools of Morgan Hill and Gilroy in hopes of receiving feedback and ideas from the local children about structures they would like to have in the park.

“We wanted to know what the children wanted. It was really wonderful to have the kids design the park,” Ron said.

When completed, Morgan Hill’s newest playground, designed for children by children, will include many unique aspects and different areas of play.

“There are a lot of hands-on and sensory activities throughout the playground,” Shirlee said.

Families can enjoy the different zones of the inclusive playground such as equipment for spinning, swinging, sliding, music and water play, as well as a special toddler zone for small children.

Ron and Shirlee spent countless hours working with professional playground designers in hopes of achieving perfection. They each have a favorite aspect of the park. Ron’s is the wheelchair-accessible suspension bridge where children in wheelchairs will be able to access and enjoy the playground.

Shirlee’s favorite area of the playground is the outdoor classroom. She hopes students from all South Valley schools will enjoy the peaceful area to learn and do schoolwork.

The process  for creating the Magical Bridge playground has been long and filled with obstacles. Before any of the designs were drawn or even imagined, the Lociceros spent time visiting inclusive playgrounds in other communities for inspiration and talked with their creators. Ron joined the Parks and Recreation Commission in 2014 with the hope that the city of Morgan Hill would support their dream project.

The Lociceros have long dreamed of the impact this inclusive space will create within the South Valley community. Palo Alto’s Magical Bridge playground serves about 25,000 visitors a month.

“We want people to use it, and enjoy it, and feel proud that it’s in our community,” Shirlee said.

“I just want to go down there and see all the happy faces,” Ron added.

Years of patience and hard work are beginning to come to life as construction of the park draws near. The Lociceros have waited a long time to see their ideas forged into a place where children of all abilities can play together — but for them, the effort is a labor of love.

Kaylee Arca is a 2017 graduate of Ann Sobrato High School and is a third-year student at San Diego State University majoring in journalism.

Guest Column
This guest column represents the views of the writer and not necessarily that of Gilroy Life. If you're interested in writing a guest column for this newspaper, please email the editor at [email protected]
Latest posts by Guest Column (see all)
Guest Column2020-01-03T16:21:24-08:00