2020 woman of the year: Bonino has volunteered at every Gilroy Garlic Festival 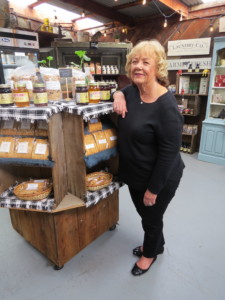 Elaine Bonino sat on a rocking chair outside the LJB Farms produce stand, a lazy Labrador appropriately named Dozer drowsily laying by her side. She chatted proudly about her family — five generations of Boninos who have made their home in the South Valley region — and their contributions to the local farming business since her grandparents moved to San Martin in 1917.

No doubt her family feels proud of her, too. Bonino was selected as the Gilroy Chamber of Commerce’s 2020 Woman of the Year. She will be honored at the annual Spice of Life gala held Feb. 1 at the Granada Theater in downtown Morgan Hill.

The Chamber staff’s original plan had been to surprise her about the news, but circumstances changed that to a phone call notification instead. “They tried to surprise me at an event, but I didn’t attend that event,” she said. “I was at the Old City Hall (restaurant) instead of at a board meeting. I decided, I’m going to a social event instead of this tonight.”

With the honor, she feels humbled. “I feel very appreciative,” she said. “I don’t know what to say.”

Living in San Martin and growing up in a farming family, Bonino got to know people in both Morgan Hill and Gilroy. She attended San Martin Elementary School as a child, but often went to the original Gilroy High School campus (now South Valley Middle School) in summer to enjoy its swimming pool and made friends there. Going to Live Oak High School, she made friends in Morgan Hill, too.

Her first job, while still in high school at age 16, was at the San Martin Winery. 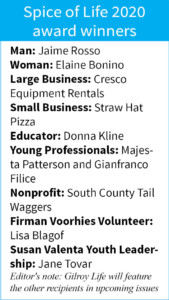 “I was very, very young and I worked in their tasting room on Monterey Road,” she said. “I was supposedly a ‘bag girl’ and spent time washing the glasses after the tasting and stocking the shelves. I was put down as a ‘family’ so I was able to sell (wine).” She worked for San Martin Winery to help pay her way through college at San Jose State University where she earned her degree in teaching.

As a teacher in the Gilroy Unified School District, Bonino has shaped the lives of many young people. She started out at the old Gilroy High School. She then went to Brownell Middle School where she taught home-economic and language arts. She retired at the end of the 2009-2010 school year and with the close of her full-time teaching career, she received the California League of Middle School’s Teacher of the Year honor for the Central Coast region. She still does work for the district — testing LPAC language learners and also substitute teaching.

Her passion for being in the classroom comes from making a difference in the lives of local children.

“It’s building a better person. Sometimes with the educational part of it, you help shape people’s lives,” she said. “It’s funny, teaching in Gilroy I’ve had numerous generations — my students’ kids and grandkids — and that makes it nice.”

Over the years, Bonino has also served “behind the scenes” in a variety of nonprofit organizations and their events. “Someone once said to me, ‘When you do something for others, it makes your community a better place,’” she said.

She lives by that philosophy. Among the organizations she has worked with, she has volunteered at the Gilroy Garlic Festival since it began in 1979, making sure the tens of thousands of food-loving guests enjoy the three-day weekend event in late July in Christmas Hill Park. 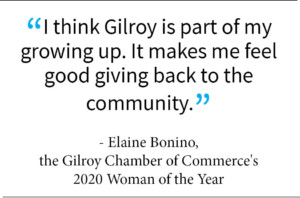 “There’s very few people in Gilroy who can say they’ve been 41 years volunteering in the Garlic Festival,” she said. “I’ve worked every area. I helped sell tickets at the very first one.”

She recalls that the organizers hadn’t expected the crowds they got that inaugural year and so didn’t print enough tickets. They had to take the used stubs and run them back to the ticket stands to resell. Bonino currently is the associate chair of the garlic braiding part of the festival, but in the past she has worked on the cook-off stage, the chairperson of the Garlic Queen pageant, Garlic Gulch and the Volunteer Hospitality (now called “Hub and Pub.”)

She was on the Special Visitors Committee, welcoming international visitors, and that evolved into the Gilroy Sister Cities nonprofit which Bonino now serves as the president. Gilroy has relationships with six Sister Cities: Takko-Machi, Japan; Angra do Heroismo, Portugal; Tecate, Mexico; Saint-Clar, France; Monticelli d’ Ongina, Italy; and Koror, Republic of Palau.

“It’s important for Gilroy to have Sister Cities because we get a cultural exchange,” she said. “It’s very good for our youth to see the differences in culture, and even the adults in our community. That’s been a nice spot in my life.”

Bonino has kept active with other events. The Bonanza Days celebration of Gilroy’s western roots in the 1970s had a parade and she was on the float committee and helped dress animated characters. She has done various duties for the Miss Gavilan Hills Scholarship Pageant. She is a board member and treasurer for the Native Daughters of the Golden West, Gilroy Parlor, and supports various projects that helps share and preserve California’s rich history.

Bonino is on the Gilroy Exchange Club board and in that capacity helps coordinate the Back to School shopping excursion for children in financial need, as well as helps with the St. Joseph’s adopt a family for Christmas program and other assistance to the community. For her involvement in that group, she received the Golden Deed Award. At St. Joseph’s, she also helps with the St. Patrick’s Day dinner and the golf tournament fundraiser. She’s also involved with the Gilroy Sunrise Rotary as the scholarship committee chair as well as involved with various fundraisers such as the Murder Mystery Dinner and the golf tournament.

For Bonino, giving of her time and talent through the various organizations she is involved with is a labor of love for the South Valley region she has long called her home.

“Somebody asked me why I do the things I do,” she said. “I think it’s just part of me. I think Gilroy is part of my growing up. It makes me feel good giving back to the community.”