Curtains Up Theater Review by Camille Bounds: “Pippin” moves with an energetic cast

The musical “Pippin” opened on Broadway in October  1972  and tells a story about a journey a young prince takes to find the true meaning of his life. In Mount Madonna School’s production, director Sampad Martin Kachuck and choreographer Charleigh France keeps the 40-plus ensemble moving throughout the performance. 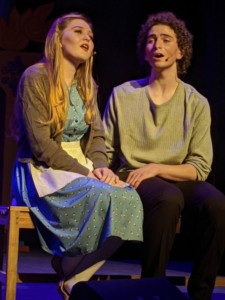 Braeden Will as the Lead Player keeps the show connected with good  timing. Noah Tervalon plays a sensitive Pippin who eventually finds his purpose in life. Connor Murphy as the domineering King stomps his way to attention and Fiona Burgess plays Berthe, Pippin’s grandmother, with a sassy charm.

The music and lyrics by Stephan Schwartz, (“Wicked,”  “Godspell”), with the  book by Roger O. Hirson and has been updated from the 1972 production to fit the new premise without losing the original intent of the story.

Mount Madonna School’s production of “Pippin” is a show where the student performers provided a lot of energy in telling the story based on a historic figures from the Middle Ages. Well done, students, in putting on this play about a young man’s search to understand the mysteries of life.

Running Time:  2 hours and 20 minutes – with one intermission