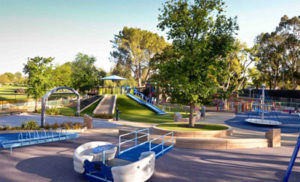 Three years ago, retired teachers Ron and Shirlee Locicero spent an evening at their Morgan Hill home watching a news report on television about the opening of the Tatum’s Garden “inclusive playground” in Salinas came on the air. The couple found themselves inspired to create a similar facility that would serve the needs of all families in the South Valley region.

The Locicero’s persistence pushed the Morgan Hill Inclusive Playground forward against many obstacles in the past three years. The ambitious project took what Ron called a “huge step” when in July the Morgan Hill City Council unanimously approved a partnership between the city and the nonprofit Magical Bridge Foundation, based in Palo Alto. The partnership means the city is committed to obtaining $2 million in funding to create a first-class playground on two-acres at Community Park that would enable all families — especially those with physically and mentally challenged children — to come together and enjoy some fun in the sun together.

With support from the city of Morgan Hill, local businesses and nonprofit organizations, and dedicated individuals who want to make the estimated $5.2 million dream a reality, the project is well underway. Earlier this year the organizers received word that the project was eligible for up to $2 million in matching funds from Santa Clara County. Ron said about $85,000 in donations have been gathered so far, and with the city’s agreement with the Magical Bridge Foundation, which was launched Aug. 1, he believes they have a Silicon Valley-based partner to raise funds for the endeavor. 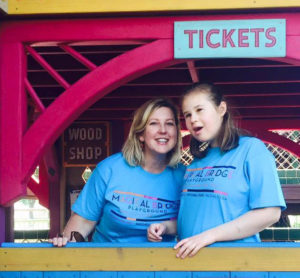 Olenka Villarreal, left, with her daughter, Ava, who was the inspiration for the Palo Alto community to develop the Magical Bridge inclusive playground in Mitchell Park.
Photo courtesy Magical Bridge Foundation

The first Magical Bridge playground was opened in Palo Alto’s Mitchell Park in April 2015. The project started when Palo Alto resident Olenka Villarreal found it a challenge to find a playground suitable for her second daughter, Ava, a child born with disabilities, to play with her older sister. She approached the city of Palo Alto and asked which of the community parks had been designed to accommodate kids with different abilities.

“They said to me, ‘Well, we don’t have parks like that. Why don’t you go and design the kind of park you think we should have,’” she said. “And that started a seven-year journey for me and a group of volunteers and people who believed in my vision. And we raised $4 million.”

The playground is completely inclusive with distinct play zones that can accommodate children of all needs. Kids in wheelchairs can get access to a two-story playhouse, a tree-house and the top of a slide mound. Play equipment includes bucket swings, spinning devices, slides, a sway boat, and a merry-go-round designed to be used for children with disabilities.

Magical Bridge’s mission is to provide outdoor play to children of all abilities to serve as the foundation for physical development, as well as social-emotional lessons such as cooperation, sharing, problem solving and kindness, Villarreal said. Without inclusive playgrounds, many Bay Area families lack a park facility to bring their children to play.

“When we were doing the Palo Alto park, no one was really sure what we wanted to do,” she said. “They weren’t sure if it was a wheelchair park or a special needs park.”

As the project progressed and the playground was built, organizers realized everyone in a community benefits from the inclusive facility through the elimination of social stigmas and prejudices as young people of all abilities play together, she said.

The playground’s “Kindness Ambassador” program grew as an outreach from teens doing their community services hours, enabling a spirit of tolerance to grow in the community, Villarreal said.

“They find they don’t have to be afraid of somebody if they have a disability or have cognitive differences,” she said. “When you see them in the community, you are much less likely to be mean or bully somebody because you are seeing someone is different. We’re really creating opportunities for people to discover how they are more similar than they are different.”

The Magical Bridge Playground model was so successful that Villarreal and others decided to create a nonprofit foundation dedicated to helping other cities create similar let’s-all-play-together playgrounds. The Magical Bridge Foundation was launched in January 2016 by Villarreal and two other women, Jill Asher and Kris Loew. The first community to step up was Redwood City. The foundation signed a contract in September to work with the Redwood City Park and Recreation Department, the Redwood City Park and Arts Foundation and various community groups, family foundations and businesses. The city of Redwood City contributed $1.5 million of Capital Improvement Project funding that had already been allocated toward a planned renovation of an old existing playground project. The project will break ground in October and expects to open in fall 2018.

The success in Palo Alto and Redwood City in raising funds for their playgrounds impresses Ron Locicero.

When the Palo Alto playground opened, Ron and Shirlee Locicero visited it and were impressed by the high quality of the facility’s design and equipment. They asked the organizers to help them with the Morgan Hill inclusive playground project.

“I met with Magical Bridge over a year ago about the possibility of working together. But they weren’t in the business of helping to build parks,” Ron said. “Since then, they’ve formed the foundation and they are in the process of raising funds for people.”

Inclusive playgrounds provide an economic benefit to the communities that build them, Villarreal said. They draw thousands of families from around the region, some who drive two or three hours to spend an afternoon enjoying the playground with their challenged children.

“More than half of the people coming to Palo Alto’s Magical Bridge were in fact from outside Palo Alto, so it was very clear that the Palo Alto park was serving the entire county,” she said. “It’s absolutely a destination park. On any given day I am giving tours of Magical Bridge to people who come from other places in the world. They come to check out the park.”
Palo Alto’s Magical Bridge playground serves about 25,000 visitors a month, she said. A typical city park gets at most 200 visitors a month, she said. Many of the out-of-towners later eat in local restaurants and shop in local stores, bringing money into the city.

But the goal is people, not profit, Villarreal stressed.

Ron is optimistic that with Magical Bridge’s help, the Morgan Hill Inclusive Playground project will in two or three years become a real place for families from Morgan Hill, Gilroy, San Martin, San Jose and elsewhere to visit.

“They’ve already done it twice and we’re going to be No. 4 and I feel we’re further along than the other groups that they’ve worked with,” he said. “It’s going to be a huge deal for them and for us.” 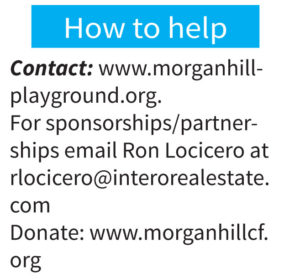