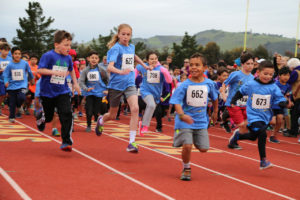 The feet of more than a thousand runners will hit the pavement on a course starting and finishing at Live Oak High School Sunday, March 25, at the 35th Annual Wildflower Run. In recent years, it has grown into a major community event for not just die-hard athletes but also families who want to encourage their children to be active in healthy physical exercise.

Organized as a fundraiser by the Morgan Hill branch of the American Association of University Women nonprofit group, the local run prides itself in being a family-friendly event, said AAUW member Patricia Toombs, the 2018 Wildflower Run director.

Besides a UTFC-approved 10K course, the Wildflower Run offers a 2K run for both kids and seniors, as well as a 5K run and walk that’s open to parents with children in strollers, she said. 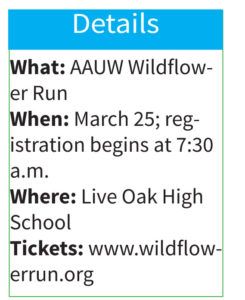 “Being one of the first runs of the year, we’re able to offer families a chance to enjoy a healthy event outdoors with something for everyone to participate in, that sets a tone for the rest of the year,” she said.  “For a lot of the kids running in the 2K, this is the first time they have ever been in a physically competitive event. The cheering support from our local Girl Scout troop and family and friends provides positive support no matter what their finishing time is.”

“They had a blast,” she said. “They kept yelling ‘Faster!’ to their dad as he pushed the stroller, which made us pick up our pace. We had planned to just walk it — and we ended up jogging much more than we had expected with that encouragement.”

For the past few years, the Shem-Tov girls have participated in the 2K kids race and have been encouraging their friends to join them. Now 7 and 10 years old, they’re both signed up to run in this year’s race and looking forward to it. 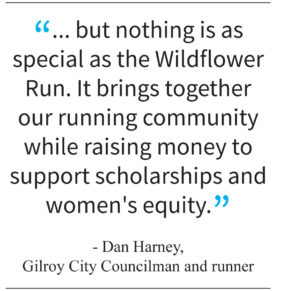 “It’s so impressive to see some kids zipping around — ones who clearly run regularly and take this very seriously,” Shem-Tov said. “But for my kids, even if they sometimes end up close to the very end of the pack, it is a fantastic achievement to have pushed themselves to do that whole thing and complete it. They proudly wear their Wildflower Run shirts throughout the year and are happy to tell anyone who asks that they ran and completed it and how much fun it was.”

The annual run has grown into a social South Valley event bringing together runners and walkers of all ages, said Gilroy City Councilmember Daniel Harney. What he loves most about this event is that it is family friendly and the AAUW organizes races for kids, parents and grandparents.

“They keep the event capped at 1,200. That makes it really feel small,” Harney said. “I have run some of the larger races in California including the Monterey Bay Half Marathon, but nothing is as special as the Wildflower Run. It brings together our running community while raising money to support scholarships and women’s equity.”

The Wildflower Run got its start in 1984 to enable the AAUW to raise money for girls and women’s scholarships. That year, it had 217 participants running along Watsonville Road and Santa Teresa Boulevard. In 1986, it moved to the current Live Oak course. Among one of the recipients of money raised by the run is Michelle Nguyen, a 22-year-old Morgan Hill native now studying at the University of Alabama School of Medicine

“I had the honor of receiving the Lauren Jenkins Healthcare scholarship from the AAUW, and it was especially meaningful to me because it feels like a personal connection to the people of my hometown that have nurtured and supported me throughout the years,” she said.

The funds raised by the Wildflower Run allow the AAUW to support local women not only in furthering their education, but also in other leadership avenues.

The group chose Jalianna Cisneros to represent the local AAUW at the National Conference of College Women Stu-dent Leaders in Baltimore in May.  An administrative justice major at Gavilan college, she plans to transfer to San Jose State University in the fall. The AAUW is sponsoring her conference experience.

“By attending, I hope to come back with the mindset of knowing when to take action in my community and school and with the confidence and skill set to be able to make a change,” she said.

The AAUW’s website provides information on the types of jobs volunteers can help with. The website can be found at www.wildflowerrun.org/volunteer.

“We don’t pay a professional management company. We do it ourselves, including working with our many local sponsors for cash and in-kind donations,” she said.

“In addition to the usual volunteer teams cheering on runners on both the 5K and 10K courses, we’ll have local taiko drummers, violin players, ukulele players, an African drummer, and hopefully a mariachi band, as well as other entertainment,” Toombs said. “Dr. Kathleen Rose, superintendent of Gavilan College, will be kicking off our runs and helping us give out awards.”