Upgraded facility will be beneficial to the entire South Valley community

“Serving those who served.” That’s the motto of the Gilroy Veterans Memorial Building.

Built in 1951 for $90,000 as a place for local service men and women to gather and socialize, the 6,350-square-foot hall in downtown Gilroy needs a major remodel. Organizers are asking local residents to help with the project and donate to the cause in a $250,000 fundraising campaign. 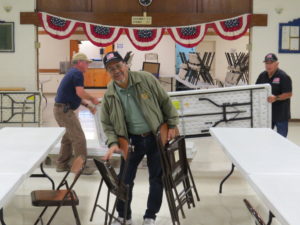 Life Media Group, the publishing company that distributes Gilroy Life, wants to encourage local financial support in fixing up needed repairs for the building at 74 W. Sixth Street. It is working with the leaders at the South Santa Clara Valley Memorial District, which operates the building, in a special promotion. After the full sum is raised, we will include the names of individuals and businesses that give a tax-deductible donation of $1,000 or more to the campaign in a special thank-you ad.

The list of items that require fixing include upgrading the electrical system ($10,000), adding a security system with remote cameras and alarms ($10,000), and reinforcing two support pillars in the front porch to modern earthquake code ($5,000). The restrooms will be upgraded at an estimated cost of $65,000 to make them comply to federal regulations for accessibility. The veterans want to make them ADA compliant because some users of the building have physical disabilities

To date, $27,757.14lp has been raised for the project. Upgrade work has been  started by replacing the Veterans Building’s entrance doors. The campaign also seeks to raise $20,000 in contingency funds. 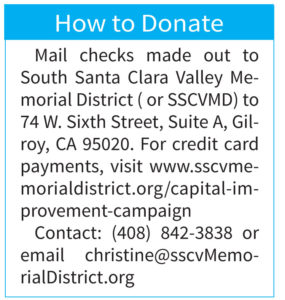 The biggest expense, at $120,000, will be upgrading the kitchen area, making it larger and adding modern equipment so that the building can be more attractive for event rentals that might require on-site catering services.

“We’re going to take out the wall and make it bigger and bring it up to date,” said Board Director Gabe Perez. “We’ve got outside groups that come here and this will help them do what they need to do more easily. They can cook and do what they want and get the function going easily.”

Another need for the updated kitchen is to make it certified by the county health department so it can be rented to people who want to bake on a commercial level for sale but don’t have a facility to do so. The money generated by this source would go to maintaining and operating the building, said Christine West, building executive director. And potentially it can be used to start a culinary program for veterans.

“There are a lot of businesses that want to make cupcakes or cookies for a farmers market kind of thing, and they need a certified kitchen to produce those things,” she said. “And South County doesn’t have any certified kitchens. People have to go to San Jose.” 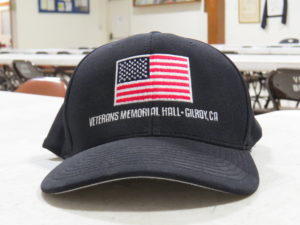 A hat worn by Perez.
Photo by Marty Cheek

The building has a 3,333-square-foot meeting hall that can fit up to 175 people for an event such as a wedding, birthday party or anniversary gathering, Perez said. It’s also often rented out for memorial services as well as a weekly Friday night bingo game.

The first memorial service ever held there was for Perez’s mother, Della Baboa Perez, who died in April 1981. The church he first approached was too small for the expected number of people. Perez asked the directors of the building if he could rent it for his mother’s service. “They had never done it before,” he said. “They didn’t charge to use it for her service.”

The rental fee for a memorial is $175 for a veteran or a veteran’s spouse or $450 for the general public.

Over the course of about 12 months, the fundraising so far is about 10 percent toward its goal with $26,257 raised. In September the veterans put on a special tri-tip barbecue fund raiser and raised $3,600. A raffle in December raised $1,055.

“A friend of mine the other day came by and asked if we’re still doing fundraising and I said, ‘yes,’” he said. “And he handed me a $100 check.”

The group has looked at other sources of funding including applying for grants, West said. It’s harder to raise money to remodel an existing building because it doesn’t have as much appeal compared to endeavors that might more directly help veterans, she said.

“Most people don’t want to fund operations. If we were trying to fund PTSD training or something like that, we’d probably get money more easily,” she said. “But fixing a bathroom or fixing a kitchen is not that glamorous.”

The remodel will benefit local veterans because the building’s mission is to provide a place for them to socialize, West said. The VFW and American Legion jointly operate a full-service bar just off the entrance lobby for people who served in the military to gather for a drink and chat with friends or play pool to pass the time.

“That’s what we’re here for,” she said. “We want to provide a nice place where veterans can hang out with friends.”

The hall is home to the American Legion Post 217, the John A. Berri Veterans of Foreign Wars Post 6309 and their respective auxiliaries. Among the 300 veteran members who use the building on a regular basis is Gilroy resident Tom Yamano, who served in the U.S. Army from 1966 to 1969.

“It’s important to have a place for the veterans that they can call their home and invite guests for some kind of socialization,” he said. “It’s just human contact in a peaceful atmosphere without having to try to go to bars.”

Not just Gilroy veterans but former service men and women who reside in Morgan Hill and San Martin use the facility on a regular basis as members, said John Ceballos, a board director. The current commander of the VFW Post is Al Alciado, a Morgan Hill resident.

Ceballos served in the Navy for eight years and later with the California National Guard for 22 years. Morgan Hill used to have a veterans post but it was closed because of “lack of interest,” he said. The Gilroy VFW post brought those veterans into its organization.

Operating costs on the building is paid for from money from rentals as well as a small property tax on Gilroy residents and businesses.

The administration of the funds is done by the Santa Clara Valley Memorial Services District, which was established by the state of California when the building was first built. Even though Morgan Hill and San Martin veterans benefit, no money comes from those communities. In the future, the district may try to put a measure on the ballot to broaden its range, Ceballos said.

“One day, we’d like to extend our district to cover South County, which would cover Morgan Hill, San Martin and here,” he said.

Modernizing the Veterans Building with a major remodel will make it not only useful for veterans but the entire South Valley region as well, said Building Board President Phil Garcia, who served two years in the United States Army, including one year in Vietnam with the 101st Airborne Division.

“It keeps our veterans groups together. The comradeship is awesome,” he said. “And it’s a community building that can be used for so many different types of events.”