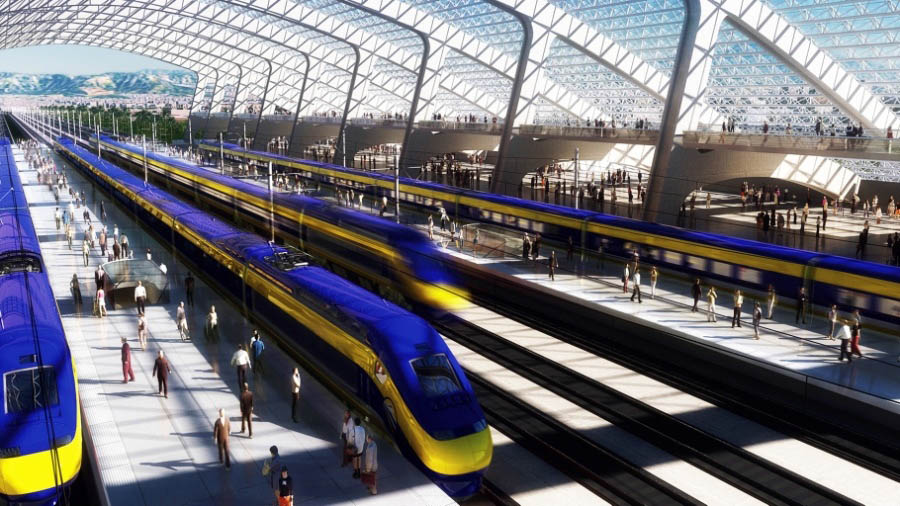 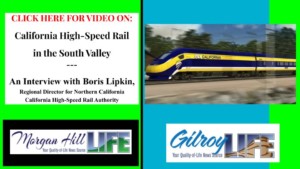 Plans for a high-speed rail transit station would fundamentally alter the small-town feel and recent investment in the revival of Gilroy’s downtown. Estimates by the California High-Speed Rail Authority show about 100 trains would pass daily through the region, but only 25 percent of those would stop at a Gilroy station.

“If trains go straight through downtown without stopping, there’s no benefit to us,” said Gilroy Mayor Roland Velasco.

The project’s environmental impact report for the San Jose-to-Merced section was released in April and closed for comment June 23. The rail authority identified its preferred route for trains as the “Alternative 4” option. This uses a “blended configuration” between San Jose and Gilroy to run along the existing Union Pacific Railroad corridor as it passes through South Valley.

The stretch from Bernal Road to the Casa de Fruta resort along Pacheco Pass makes up about 30 miles of the 380-mile track between San Francisco to Los Angeles.

A view of a high speed train moving through a wind farm in the proposed high speed rail network. California High-Speed Rail Authority

Under the $10 billion Proposition 1a Bond Act, which voters approved in November 2008, the authority is legally required to design its system to have trains travel between Los Angeles and San Francisco in two hours and 40 minutes. Nine years ago the city of Gilroy anticipated building to begin by 2011.

Today, many wonder when — or if — the high speed rail will ever arrive because it is facing economic challenges with a lack of federal and private funding sources. Some see the looming economic recession as bad news for the future of high-speed rail in California. In 2008, the project’s proposed budget was estimated at $39 billion.

Today, despite a scaled-back project, the rail authority estimates the total construction will cost between $63 billion and $98 billion.

“I’ve never been a supporter of high-speed rail,” Velasco said. “I thought it was too little, too late for the state of California to get into the high-speed rail business.  Ever since (voters approved the proposition), it’s just been this big boondoggle.”

Boris Lipkin, the Northern California regional director for the rail authority, is more optimistic about the success of the project. Once the physical infrastructure is built and the system is up and running, he sees private investors playing a “major role” in running and expanding the service. In the Central Valley, the project has more than 100 miles of track already being built.

“There’s a long history of recovering from hard economic times by using large infrastructure projects as one means of stimulating economic recovery in hard times,” he said.

If the authority’s preferred route is approved, construction between San Jose and Gilroy would take place during the next 10 years, he said. 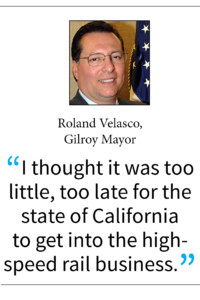 A major transit station in Gilroy would change the downtown landscape in significant ways, said Gary Walton, the board president of the Gilroy Downtown Business Association. Originally, the authority had intended to build a 6,600 to 8,000 vehicle parking structure to service this station. This plan was later scrapped.

In order for the project to be successful, it must increase the speed and frequency of the trains so local commuters can depend on them, Walton said.

“If they can make the trains faster, if they can create more trains on more routine schedules, that’s been shown to increase ridership,” he said.

Although a transit station built in downtown Gilroy might one day help businesses by bringing in commuter traffic, questions about whether there will be enough parking spaces, security and the lasting environmental impact on the downtown area remain unanswered, he said.

“We need to look at this potential transit center as something positive and plan for that,” Walton said. “It’s not like traffic is going away . . . The transit station downtown would be a great thing if you maximize the opportunities that it presents.”

Financial issues also need to be addressed in paying for this project. The economic condition of California, especially with the effects of COVID-19 on decreasing jobs and closing small businesses, will impact the construction schedule and financing of the high-speed rail project in the next few years.

“The state has a $58 billion dollar deficit. The federal government basically wants their money back. This thing is just fraught with problems,” Walton said.

In another potential financial obstacle for the project, the California State Assembly co-sponsored a bipartisan resolution June 5 to have the rail authority defer a $20.5 billion stretch of construction of 171 miles between Bakersfield and Merced. This major contract was to have been awarded this year and would have included a maintenance of the tracks for 30 years. The resolution cannot stop the authority from awarding the contract, but it might result in a long and difficult legal and fiscal battle if it ignores the legislators. The authority has not yet commented on this resolution.

House Resolution 97 was introduced by Transportation Committee Chairman Jim Frazier (D- Fairfield). It directs the rail authority to not enter into certain contracts before the legislature has considered and approved its funding request for the remaining 2008 bond.

“The only remaining opportunity for the Legislature to weigh in on the direction of the high-speed rail project occurs when (the High-Speed Rail Authority) asks us for the remaining $4.2 billion in bond funds,” Frazier stated in a press release. “We cannot allow HSRA, or any department, to enter into contracts that bind the Legislature’s approval of future appropriations. The Legislature’s role in approving the budget must be respected before key decisions on the state’s largest infrastructure project are made.”

Money challenges aside, if the rail line is built through the South Valley along the route the rail authority prefers, it would have a serious infrastructure impact on the ambiance and traffic flow of Gilroy and Morgan Hill’s downtown. The constant noise and vibrations of passing trains would disturb nearby homes and businesses. Emergency services in both cities would face severe delays if as many as 16 trains an hour traveled along the tracks, stopping police cars and fire trucks from passing until the east-to-west streets were cleared.

“When you have trains going through, the last thing you want is essentially a wall dividing the city,” Velasco said. “I’m not sure what the solution will be.”

Meanwhile, administrators with the Gilroy Unified School District are on what the mayor describes as “pins and needles,” as several buildings fall into the high-speed rail alignment area. Although they have funding to rebuild if necessary, the uncertainty surrounding the HSR project means the school district does not know where to put them.

Whether the Alternative 4 route from San Jose to Merced succeeds depends on if Union Pacific agrees to give the high-speed rail use of its right of way. In a 2010 letter, the railroad warned the rail authority it would not agree to allow the high-speed rail system to use any part of its right of way or to be so close to its tracks that it would impair safety or its freight movements. It is not clear if Union Pacific will now go along with this proposed route option.

Gilroy’s mayor sees the high-speed rail project as part of a larger state plan to develop higher-density urban areas connected by public transportation. There is a hope that this will reduce traffic congestion and the environmental pollution caused by cars on the road. With electrified rails along the Caltrain track, the city would be more connected, gaining potentially faster and more reliable service, without the construction there are problems associated with building high-speed rail tracks.

“The best thing we can hope for is electrification of the rails,” Velasco said.

The development of high-speed rail will transform the transportation culture of the state, Walton said.

“Either we’re going to have to change the way we develop in this country so that it promotes mass transportation or, at some point, admit we’re going to continue to build this kind of low-density sprawl — if that’s what Americans want,” he said.

Although he has doubts about the efficacy of the high-speed rail project, Walton believes it might provide some positive changes in South Valley transportation.

“I think there’s an opportunity for Gilroy to basically build on their assets and maybe change how we develop,” he said. “We do things to promote other forms of transportation, we become much more walkable, much more bikeable.”

Like many Gilroy leaders including Mayor Velasco, Walton takes a cautious view of the California High-Speed Rail system coming through South Valley.

“Even though you’re fighting a big bureaucracy, the city needs to be vigilant so that whatever comes through here has a positive benefit for Gilroy,” he said. “We need to stay vigilant.”