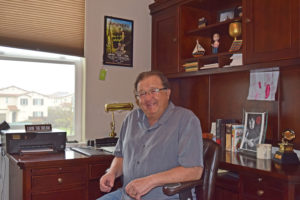 Photo by Robert Airoldi
Morgan Hill resident Steve Dini submitted his screenplay “JungleBall” to Hollywood in hopes of his story becoming a movie.

For many veterans, their battles continue long after they return home. Steve Dini, a Morgan Hill resident who served in Vietnam, found a positive way to deal with his wartime experiences.

The Army veteran, who is also a familiar presence in Bay Area radio and television, took to his keyboard to lay his memories to rest. His script, “JungleBall,” tells his story of playing fast-pitch softball during the final days of the Vietnam War. Not only was it a therapeutic undertaking, but it’s also gained the recognition of Hollywood through various screenwriting competitions Dini has entered.

“I hope somebody looks at this and says there’s a human story,” Dini said of his script. “It’s a soldier movie, not a war movie. The war was going on inside our heads. The war was being fought at home in hearts and minds.”

At a recent “pitchfest,” which is like a speed dating event for screenplays, JungleBall received a positive response from 17 of the 24 industry insiders Dini visited. It was also named to The Script Mechanic’s 2018 “lug nut list,” which includes the top 10 scripts he evaluated. So far, Dini is still waiting for that big break, but he’s not discouraged.