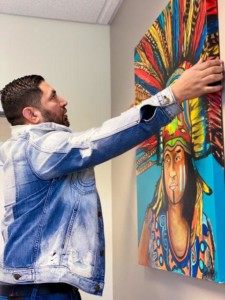 Photo courtesy Rosa Quiroz
Gilroy artist Nacho Moya hangs one of his paintings at the Center of Excellence in Diversity in Medical Education at Stanford University.

Creating art requires inspiration, determination, vision, courage, and opportunity. A little support doesn’t hurt, either. Nacho Moya is a perfect example of how these elements can combine to achieve success, if you believe in yourself. From humble beginnings to a thriving business in downtown Gilroy and a promising future, he’s using his gifts to make an impact on Gilroy and beyond.

Ignacio “Nacho” Moya, 38, was born in Mexico. He moved to South County at the age of 18. He grew up in Gilroy and now lives in Morgan Hill, with his wife, Alma Torres, a son and a daughter. He opened his business, Moya Art Gallery and Studio, in August 2017. His work is distinct, and he’s become a fixture at community events. But what seems like an overnight success story at first glance springs from a palette of struggle and sacrifice.

“I’ve wanted to be an artist since I was in sixth grade,” Moya recalled, sitting in his studio surrounded by huge, colorful canvases and personal mementos. As a kid, he played with rocks instead of toys and rolled a tire downhill for fun. They were happy times. But he wanted something more. “I loved art because I won a contest in school. That was the first time I thought, ‘I’m an artist. I’m creative.’ I was always drawing since I was little.”

Inspiration and determination were there. Next came the vision.